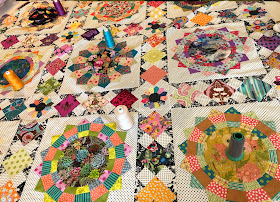 
The minute I had delivered the Bountiful Baskets quilt I was hard at work putting together the last blocks of Spin Drift. 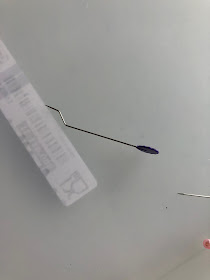 There was a good day and a half of piecing left, but the change of pace was welcome. I had an accident with a pin, and completely sewed a block into the center upside down. It never pays to hurry. 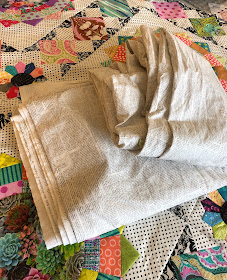 The sun had set late in the day when I was making decisions on backing and thread. I found a great buy earlier this winter on this text print backing, and it suited me just fine. You can see the threads in the top picture I had been playing with, and spooling out thread onto the blocks. You might notice there are some fairly vibrant colors on those cones, but don't panic. I learned something valuable by playing with the unwound thread.

I really wanted the pattern and fabrics in this quilt to shine so I needed thread choices that would blend. We would call that a neutral choice. In this case, those bright colors are neutrals. 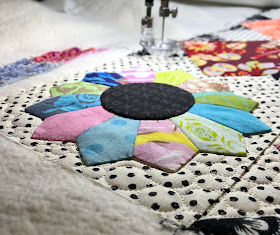 Neutral thread on neutral fabrics blend well. There is low contrast or in this case almost none. That would make the background quilting almost disappear. I was going for texture only. Stay tuned this week, and I'll show you some stitching with some of those bright thread colors, and hopefully I'm right. 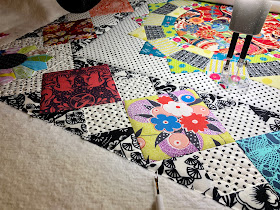 In the weeks leading up to the finish of the Spin Drift top, I'd been planning the quilting. Again, the quilting motifs needed to take a secondary position, and just compliment the pattern and fabric. First, I started by using a smoke colored monofilament thread by Superior Threads to ditch-stitch the entire top. Then I switched to a 60# Glide, and started working from the bottom up. The background fills would be first. 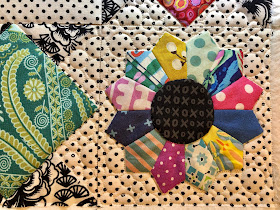 I finished off the small Dresden plate background areas, but left the actual plate until later. I try to do as much as I can without changing threads until it's necessary. 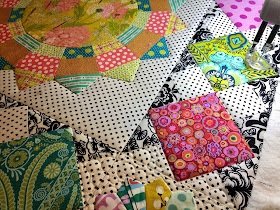 What You Need to Know:
Two Types of Ditch-stitching

Then it was time to ditch-stitch the squares on point.  We don't naturally think of it, but it's important to consider how the seams on the back of the quilt are pressed before outline or ditch-stitching. When I worked through the quilt with the monofilament, I took care to keep the stitching pretty close to the actual seam line. The block seams on the back of the quilt were pressed to the side. And even though I was stitching through a seam, there was still a layer of fabric behind it. 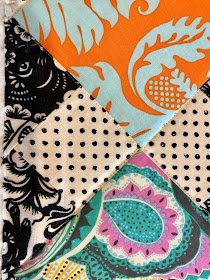 But here, in all parts of the sashing, the seams have been pressed open, and stitching directly in the ditch would stress the stitching that holds the fabric together. There is no layer of fabric under an open seam--just the stitches. So my ditch-stitching is very close, but not in the seam. It lays beside it so it can go through fabric. 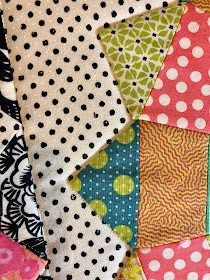 You can see the seam to the left is ditch-stitched very near the center there. The area around the appliqued Dresden can be stitched as close as possible without snagging into the points. There is no vulnerable seam below. 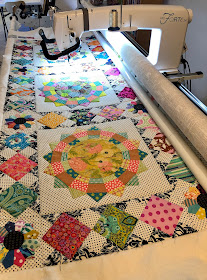 I'll have some good progress to show you the next time you stop in, and maybe before my daffodils bloom! Oh, spring is SO close here you can smell it!