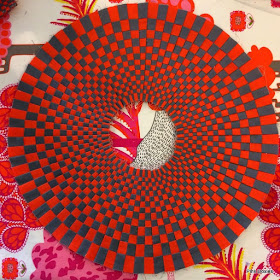 
The Pittsburgh Modern Quilt Guild issued a challenge to all members for minis to display in the Pennsylvania National Quilt Extravaganza in September 2017. (PNQE) For months I wracked my brain for a fun project, and then settled on a project from a Craftsy class I'd recently watched. It's based on a 25" 9 Degree Circle Ruler designed by Marilyn Doheny, though Andi Perejda presents the class.

This class is very well presented, and easy to follow. I've watched it several times as it is a completely new technique to me, and checked back frequently to make sure I was on track while working through it. I think that's the joy of Craftsy classes knowing they never expire. Sometimes this gal needs a refresher, and the instructor is still right there! 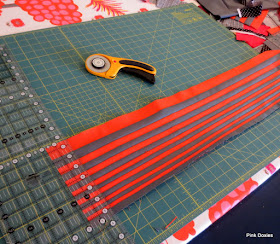 
The circle is comprised of 40 sections made from 2 strips at 9 degrees each. 40 x 9=360 degrees. The first day was spent entirely sewing strips of varying widths.

I shouldn't tell you that I cut one whole length of fabric like above to find out that I had reversed two sections. Two seams on each of 40 pieces had to be carefully picked out and resewn. I timed that mistake at 1:15. An exercise in patience, for sure. 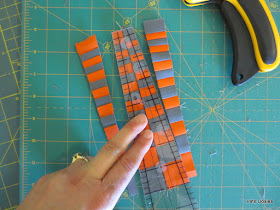 Two strip sets are matched and sewn together. One with Kona Tangerine at the end, and the other with Kona Graphite. Seams nest, but there is some tedium getting all the seams to match up.

Now the 9 degree ruler comes in, and the 'doublets' are trimmed. I found that adding loads of rubber circles grips to this narrow ruler helped keep things under control. You have a a thick seam under the ruler that makes things precarious to cut accurately. 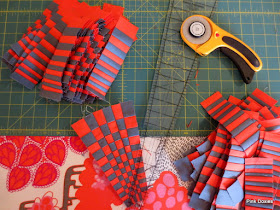 This was at the end of my first long day of sewing. I started at 6 a.m. and this was taken at 6:30 p.m. My husband was calling to ask if I was ever coming home. I'm sure you understand when I say, "I had to see it work, and what a relief, it did!" 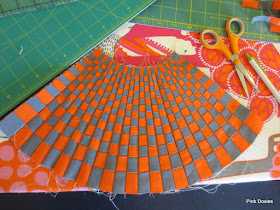 
The next morning I was back at the sewing machine. I sewed, and sewed, and ripped, and ripped. At one point I realized that directing all the seams in the other direction made more sense, and then I proceeded to sew through many of them. It was a frustrating experience, but you had to keep going with your chin up. 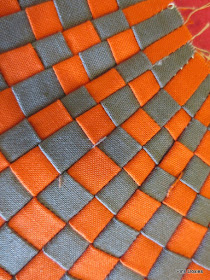 Every expert will tell you, don't show people your mistakes! They'll never see them if you don't point them out. But for those of us that analyze up, down and sideways, it's a way to show growth. So look closely, and you'll see it's not p*rfect. (I hate that word.) And little things like an off seam did not get ripped out. I just tried harder the next time, and there was a vast improvement by the time all 1,120 pieces were sewn together.

This was the end of the long second day. 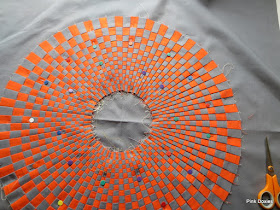 
As to seeing my thread color was not well matched to the project, oh, well. I have been trying out a thread new to me these past few months, and for piecing it has made a real difference. I like Presencia 60 wt. 3 ply cotton thread for its lovely strength in a fine thread. I find it easier to piece accurately than with a 50 wt. 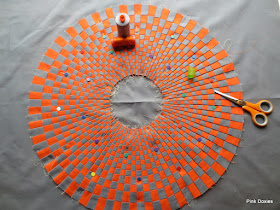 Time to applique this monster down to a background. The weight of the piece was shocking, but there were nearly 2 yards of fabric used in it minus the trimming. My top pick for any hand sewing is Auriful because it resists tangling, and sews smoothly. Lots and lots of pinning along with some handbasting held it all in place. 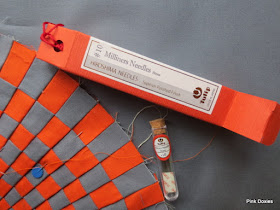 If you're an applique enthusiast, you have your favorite needles. I love these Tulip #10 Milliner/Straw Needles. 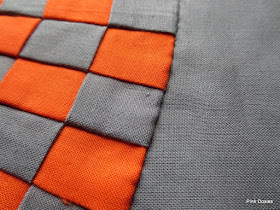 They're thin, flexible needles, but when doing something with this much bulk you will bend them a bit. 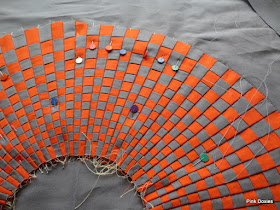 The tips of these edges had several pieces with holes from where I'd ripped out seams. That proved lucky as they turned easier, and made gauging my 1/4" a breeze. 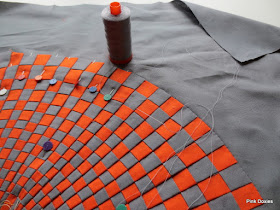 The outer edge was done with little stress... 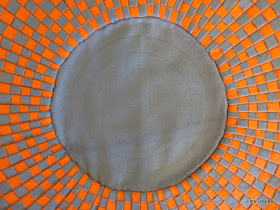 
You'll have to hang on until later this week when it's ready to send or deliver. The grass continues to grow, and there are several other projects in process. I promise this one will be done before the week's out, though. See you soon!