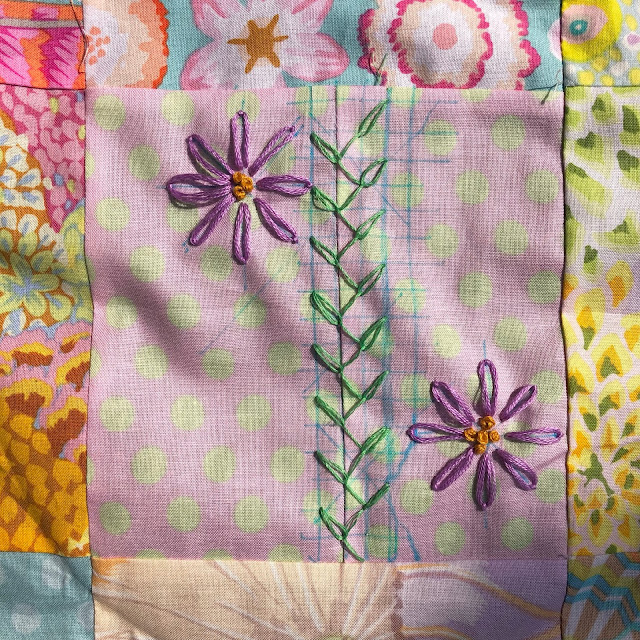 A Simple Summer Quilt
This has been a good summer. Those of you who know me well will think I'm nuts for saying so, but after last summer, well, it is good. To top that, this has been a doozey of a week, and without explaining the gory details everything panned out well. The involved party is recovering, and it's almost nice to have a slow down for a few days. For one, it's given me time to sit, to stitch, and to write. I really want to tell you about this new quilt for summer--for just me. 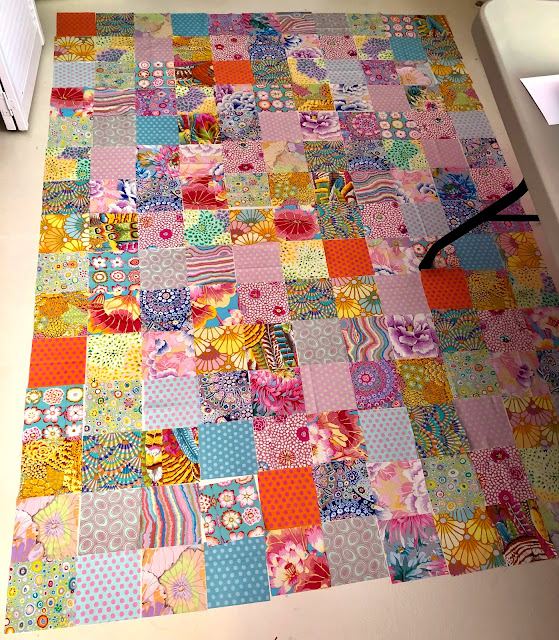 I've had a stack of Kaffe Fassett fat quarters laying about for a few years. I had them stashed where we vacation, and decided I needed to do something with them. Having just pulled out my Jane Brocket books again, I thought something super simple suited me fine, and it would just be a quickie project.
I laid everything out on the floor as I don't have a design wall there, and was not surprised when my husband later confessed he'd walked through it. (He couldn't see it??) No, he needed a lightbulb in the closet in front of it, and felt something brush his feet. I think it's hysterical how we quilters take in all these details of space around us, nature, design, and so on, and it's lost on half the population. Not a problem. I just referred to my picture, and put things back in place. Then I labeled the rows by number, and picked all the rows up to bring home and sew. Problem solved. 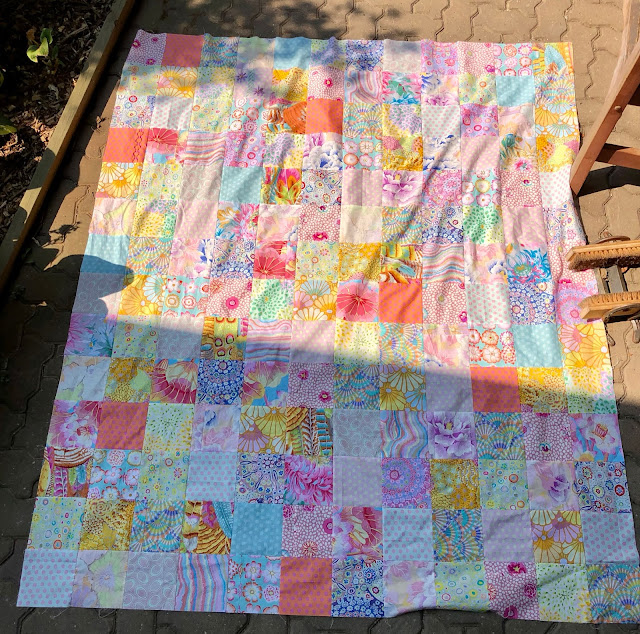 It was delightful working with these really beautiful fabrics, and I found myself wanting to spend more time with them. I'd had several scrap chunks left when I first cut out the squares, and decided since this was indeed for me, I would piece those scraps to make enough squares to enlarge it by another row. Some were quite easily blended, but others were more obvious. Then the Jane Brocket books came back into my mind, and I thought, "Why not highlight those pieced blocks instead of trying to hide them?" 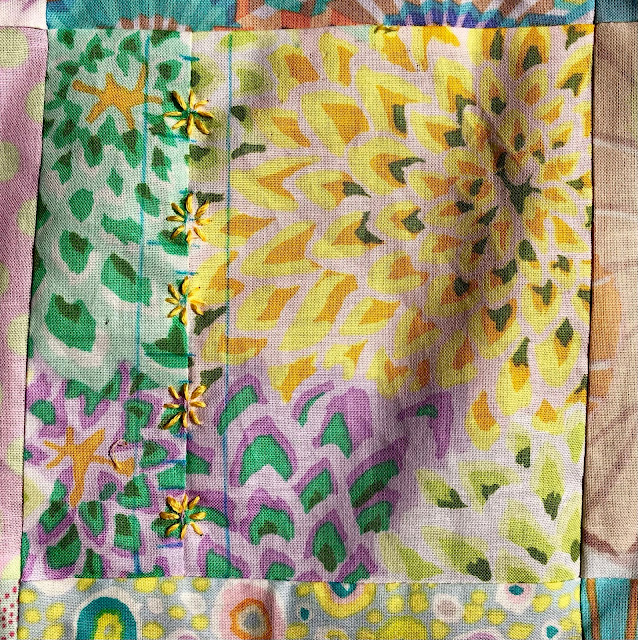 So I will make it perfectly clear, I am a beginner with embroidery. I keep buying books and reading articles about it, but I rarely actually do it. I started by trying some easy stitches, and it was a Laurel and Hardy Show at best. Half way through the blocks I had decided to embroider, I shut the books, and winged it. I do far better just making it up as it goes along. 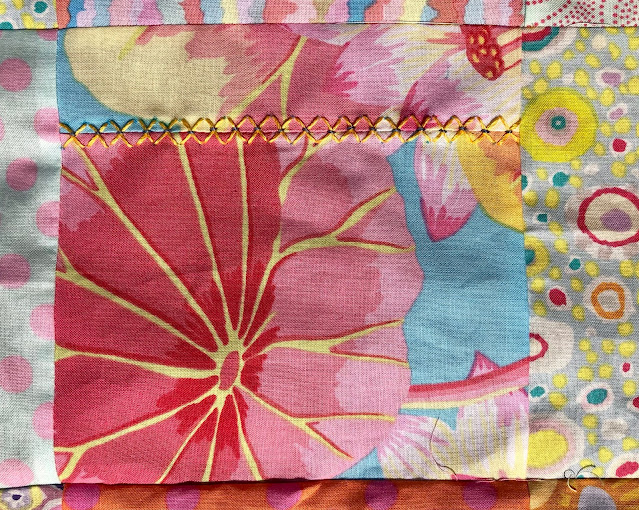 Each block is a little different. None are too fussy. The goal was not to make them stand out. It was only added interest. It said, "This is home made, imperfect, and just a little bit wonderful." I already love this quilt! It's in the studio where I'm making the backing from a special piece of fabric given to me by another quilter, Beth Sellers. I'll show you the next time, and you'll know why it's perfect. 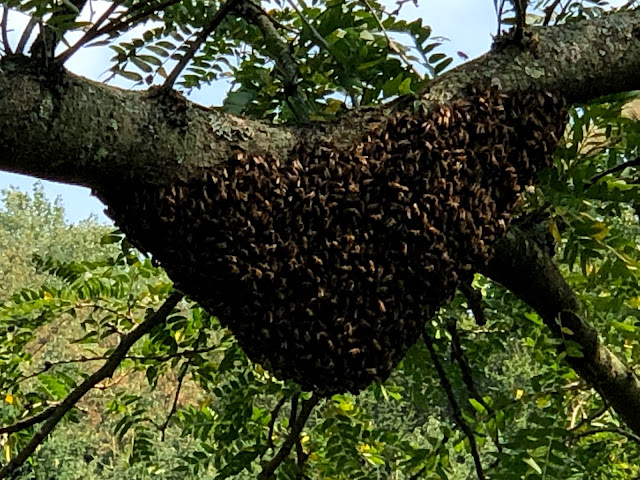 Cue the BEES
Last weekend I had a near run in with ground hornets. It took us 2 days to eradicate it near the porch, and the nest was 6-7" across and deep when we could finally see it all. It scared me since I've been attacked twice before. So as I mowed around the tree in the front yard, I caught the sight of this just above my head. Oh. My. Gosh! I was done for the day.
After a quick discussion, we contacted the local bee keeper's club, and word came back to us someone would be by soon to get the wild bees. I had no idea how entertaining that would be. The man and his young son agreed I could film it, and I found it fascinating. You can see my garden in the background. 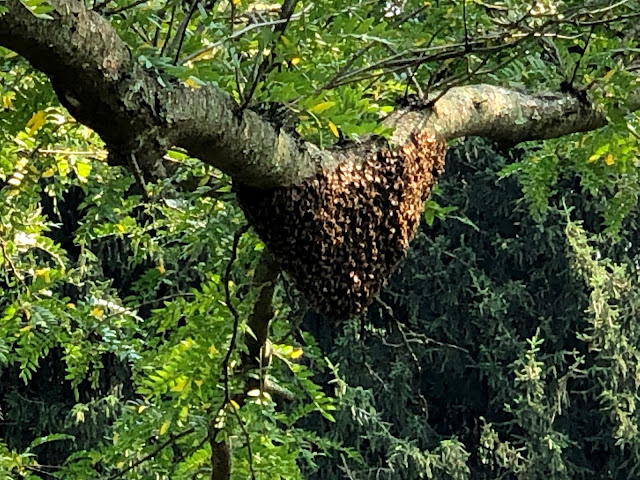 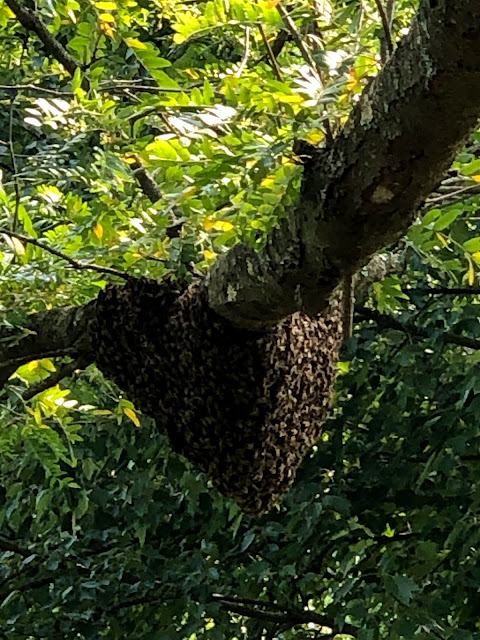 The estimate was 5-6 pounds of bees here in the end. 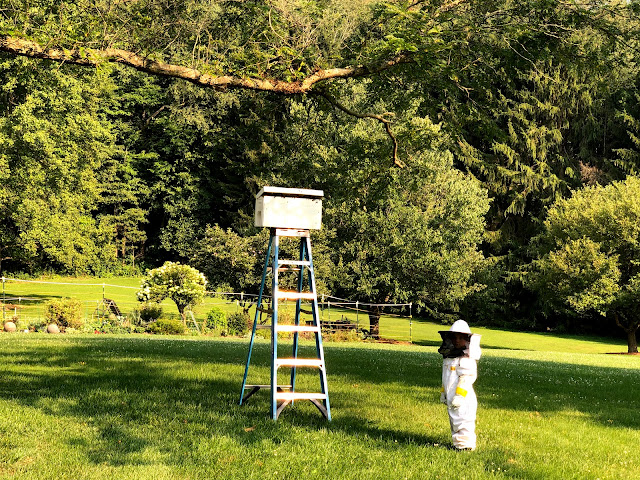 And that was it. It was far less dramatic than I'd anticipated, and that's how the rest of the week went as well. As scary as life looks at times, it doesn't pay to panic. I've found a bee motif to add to the quilt top before it's layered, too, because this is something I need to be reminded of. Wouldn't you say?
Come on, Doxie girls.
Let's go sew, and bee happy!