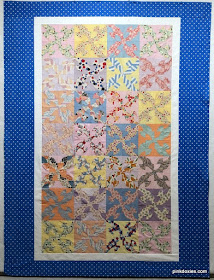 These blocks were found in a little store miles out in the country, tucked into a basket under piles of other vintage textiles. You must dig for buried treasure, you know. They came home with me, were carefully washed and pressed, and sat in another box for about two years. As I systematically pull out unfinished projects, they have been brought to life.

Read A Sweetheart of a Quilt to see the original condition the blocks were in when I started, and how I trimmed them.

I auditioned many border fabrics, but this present day fabric of blue and white dots was historically close to the period of the 1930-1940's when I believe the blocks were stitched. It also gave the pastel backgrounds a lift as there is a lot of strong color in these blocks. I chose to use a narrow border of Kona Snow between the blocks and border as a spacer for contrast. I think it nicely framed it, and that would have been typical of quilters during that period in our area.

Backing: I've decided it needs a pink or yellow backing, and will start looking for something appropriate. At 67" x 89.5 it will be long enough to use on a twin size bed, and even cover and tuck the pillow.

It's easy for me to look at textiles from the past, and think how much simpler life had been then. It's purely a romantic notion when you consider the advancements in medicine, communication, safety, and travel. Lately I've been appreciating the convenience of local dams for water and flood control. Flooding destroyed many lives in the early part of the century these blocks were made, and there's nothing romantic about it.

There are good photos and documents from the time period here. Times Reporter: Impact of 1913 flood still felt in Tuscarawas Valley Flooding was a phenomena that devastated people across the world.

Good Thing We Were Quite Sober
& Not on a Drunkard's Path!

We've been getting a lot of rain here. The water has been running off our hill toward the stream below for days. There are places in the ground it can be seen bubbling up from springs. "How high is the river?" is something people ask right now. We need clear skies and sunshine, but rain is forecast for 6 of the next 7 days. My husband and I were out checking on some ground in the country yesterday, and winding our way home on the back roads. We passed a sign for High Water, and drove through an area that had definitely been underwater days before. It was powerful enough to float logs across the road into a field. I think we thought that was the end until we came to this part of the road. It was quite a shock! 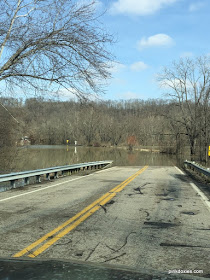 Check out my Facebook page, Julie Stocker, for a short video showing more of it, and friend me, if you'd like. I'll friend you back, and get to know you better.