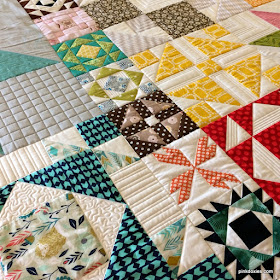 Yesterday was a challenge to get through the last pass on this Moda Modern Building Blocks. I was pretty excited to finally unpin, and evaluate its progress. 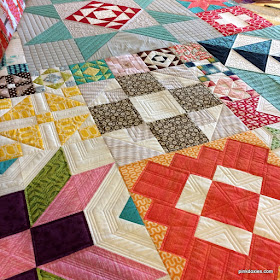 Several people have asked why I didn't quilt the whole thing in one run. I've been explaining behind the scenes, but it's because of the size of the blocks. Some are 36"! 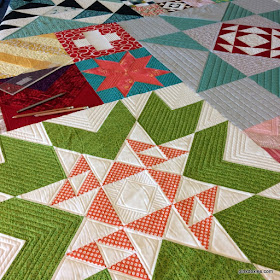 If you look to the top right hand corner of this picture, the teal-grey-red star block has sections unquilted. Those sections laid on the sides of the block rather than the top and bottom. In order to do the ruler work planned, I needed to have all of the block visible at once. They were too long to fit. Rolling and unrolling so many times would be unthinkable so waiting until it could be turned at the end was an easy choice. I'm at that point here. 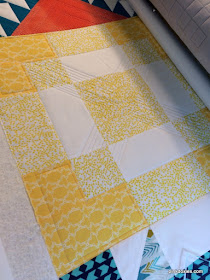 This is my first attempt at doing a whole quilt with only straight line motifs. I did have to add some stippling, but stuck to only stippling for filler. I wanted the quilting to be simple as the sampler is so busy itself. This quilt is typically presented in solids, but mine was destined for prints, of course.

Looking for ways to add pizzazz to each block making it individual was a bit of a struggle for me. I could see a change in my thought process the more I worked. By the end, I was working better with imposing quilting lines that didn't naturally occur in the piecing. And while I particularly like the yellow block above, I had a bit of an eye opener when I saw it from the back of the quilt later. 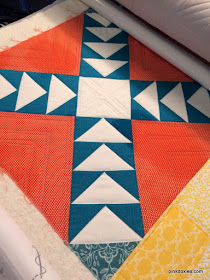 Not every block had to be a star. 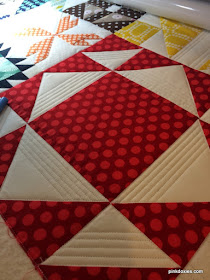 Sometimes I chose to quilt portions of a block leaving other parts in just an outline. My batting was appropriate for stitching as much as 8" apart so it was okay. 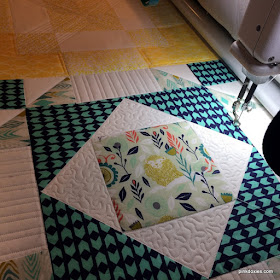 My favorite block of all was this fussy cut lion. I saved it for last. 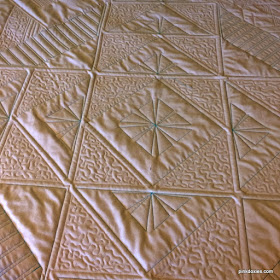 So here's where I was first excited to see how using multiple colored thread with matching bobbin thread would look. I love that pop of color on the solid grey backing. I was also a little terrified that I had used a solid backing to do this, but I doubt it would be this dramatic if I'd used a busy print.

I also became aware of several open areas that needed more quilting. The lion block above, for example. I needed something around the central lion that wouldn't detract, and also in the printed areas. Yes, some areas were intentionally waiting until I turned it, but not all. I had to get out my marking tools, and see where I could add more lines. Lots and lots of fine tuning back and forth to even out the quilting were still ahead. Disappointing to me? Yes, a little, but this was a first shot, and positively a learning project.

Heck, I should tell you how overjoyed I was that there was only "1" tiny, nearly invisible tuck in the whole backing! With all these lines coming together, that was a thrill. 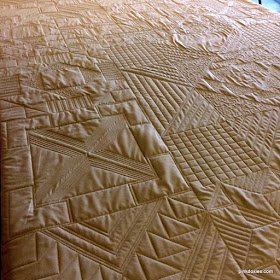 I hadn't been sure of using that gridwork in the upper right corner with the potential for tucks. Now I'm happy I took the chance. 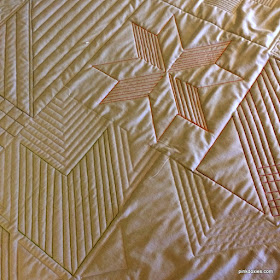 So at the 3 week mark I still have more work to do. Pretty fun work, though, so no complaints here. My deadline is still at a safe distance.

Linking up with~
Crazy Mom Quilts